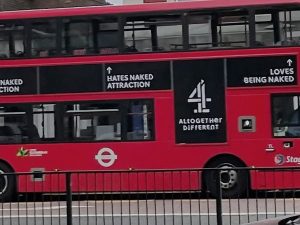 This news article made me laugh out loud. It is not exactly a surprise that the advert drew complaints but some of the complaints are not what I expected.

Before we continue, I just was to explain where I’m coming from. The advert is humour. Humour isn’t always well-targeted BUT it is supposed to be fun. It’s not an attack. No matter what joke you make, there is always a chance that someone will take offence or get upset, but that doesn’t mean we shouldn’t have humour. The advert has no pictures, no rude words, zero sexual connotations and is supposed to attract attention by making people smile. It’s a piece of cheeky fun.

“The advert was described as “tone deaf” by many, with others saying it put passengers at risk of sexual assault.”

That is just naive. In what way is that an invitation to crime? If there are people out there likely to commit sexual assault, they are criminals and dangerous regardless of a funny advert. Don’t blame the advert, blame the criminals.

“There were also concerns children could be in the indicated seats.”

Admittedly unfortunate, but they might (or not) like the show, and that’s funny too. Don’t pretend that kids don’t watch stuff they shouldn’t be watching! WHO is going to think the advert inadvertently pointing to kids is an actual comment?

“Writer Tracy King raised the issue on Twitter, saying: “What the hell is this creepy bus ad? You can’t just label non-consenting passengers like that. Does @Channel4 not know how many sexual assaults take place on buses?””

This is simply mad. No sane person will think that random passengers are being selected for attack by the advert. Why is an opinion on nudity being directly linked to sexual assaults? It’s the whole nudity = sex thing all over again! Being “labelled” by the advert is embarrassing at worst. I admit I don’t know the crime statistics for this advertising campaign but I suspect that no sexual assaults at all were caused by or influenced in any way whatsoever by this campaign.

If you haven’t registered for a free account for our FREE adult community, you won’t be able to:

If you enjoy the community and want to help us continue to run, please consider showing your appreciation.

Buy us 2 coffees or more (via Ko-fi.com) to become a Community Supporter and enjoy the benefits you get in return. plus the satisfaction of helping support our growing community. Find out more here!

There are no users currently online

Find out more about the inspiration behind this community here. See some of the videos which led to NakedExperiment.

©2014-2023 NakedExperiment.com (except for user uploads which remain the copyright of the original poster).